The little mountain that could…

But first a little history

In 1963 Big Squaw opened with a T-bar that climbed 600 feet and accessed four trails. The following year, a second T-bar was added climbing 250 feet and providing less challenging trail access for novice skiers. An exciting day for Squaw Mountain came in 1967 when a double (two person) chair lift was installed on what would become known as the upper mountain. The chair installation allowed access to the summit of the mountain with an option to get off at a point about one-third of the way up the lift line. This new chair increased Squaw Mountains vertical drop to 1700 feet and made it the second largest ski area in the state at the time. Before the opening of the 1987 season the original T-bar was replaced with a triple (three person) chair lift. This mountain was hopping!

You thought it was called Big Moose Mountain? Here’s the 411. At the request of Maine Indians, on August 11, 2000 the State of Maine passed legislation outlawing the word “squaw”and the alternative spelling “squa” in Maine’s ponds, streams, islands, bays, mountains and other locations. This new law required municipalities change such place names if they exist within their borders and that county governments change them wherever they exist in the unorganized territories. What once was Big Squaw Mountain is today named Big Moose Mountain, though the privately owned ski resort maintains the name Big Squaw Mountain Ski Area. Less confused? Good. And by the way, none of the locals who grew up skiing here call it Big Moose Mountain. To us it will always be Squaw Mountain and we say it with the utmost respect and affection.

In March of 2004 an incident occurred; a chair carrying two skiers fell from the cable and the double chair never ran again. All the skiing was forced over to the lower mountain serviced by the triple chair. By 2010 Big Squaw Ski Area would close due to financial difficulty.

In February of 2013 a grass roots effort reopened the lower mountain. This effort has seen great success, check them out at www.skibigsquaw.com Love what they are doing? Contribute. Margaret Mead was right. Never doubt that a small group of thoughtful, committed citizens can change the world; indeed, it’s the only thing that ever has.

Let’s get back to my day of skiing, shall we? The very first time I put on a pair of skis I think I was somewhere around 8. I spent most of my winter weekends in some sort of ski program at Big Squaw, all the way up into my early high school years. After plowing my way down a few trails (and being put to shame by some very skilled third graders) it all started to come back to me. Slowly.

Set against the backdrop of the Moosehead Lake Region, I found myself completely amazed at the view. Were those mountains there when I was a young girl learning to ski? I do not remember them from even my teenage years but they must have been there. Look at how amazing it all is…

I decided that the view must just be too stunning to appreciate as a child. I vowed, standing in the snow trying to take it all in, that I would bring my children here to ski and be sure to point out the different mountains. I am going to share the view with you now but you have to promise that you will try to take at least a day and go stand in that fresh tilled snow and see it with your own eyes. No picture will evoke the feeling of smallness that comes over you when you gaze off into the horizon. 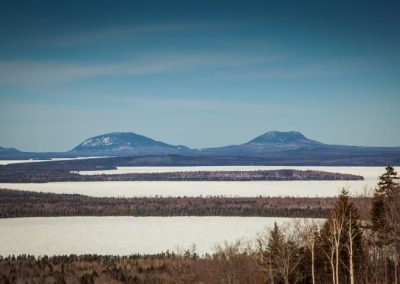 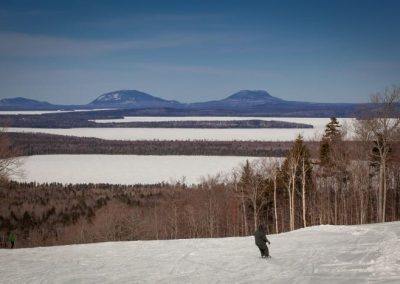 I think you can see why I spent more time standing and staring instead of skiing. The view from the top must stop your heart for just a beat. Literally. The price tag to get there will. This is a dedicated group and I have faith that they will get there.

I know that it is a little late in the season for this bump for the ski area but this would be the coolest thing you ever did for Easter weekend. I know they are open through Easter but I am uncertain how many weekends after this.

Saturday, April 4th they are hosting a full moon party. Enjoy the best of spring skiing and the best of entertainment. Junction Express will be rocking all evening for their Apres Ski Event. BBQ Dinner will be served slopeside.

So get a room somewhere in the Moosehead Region and buy a lift ticket when you get to the mountain. It’s only $25 for ALL day! The snow is plentiful. The groomer will have the slopes all tilled out. You will not regret it. I promise.

Oh, and take your camera but make sure you stand and stare for a minute or two as well. Breath it in. Close your eyes and feel it. That’s the Moosehead effect. It never leaves you.

Visit the Lodging Page more information on lodging in the Moosehead Region.

Visit facebook.com/FriendsofSquaw for more on the little mountain that could. 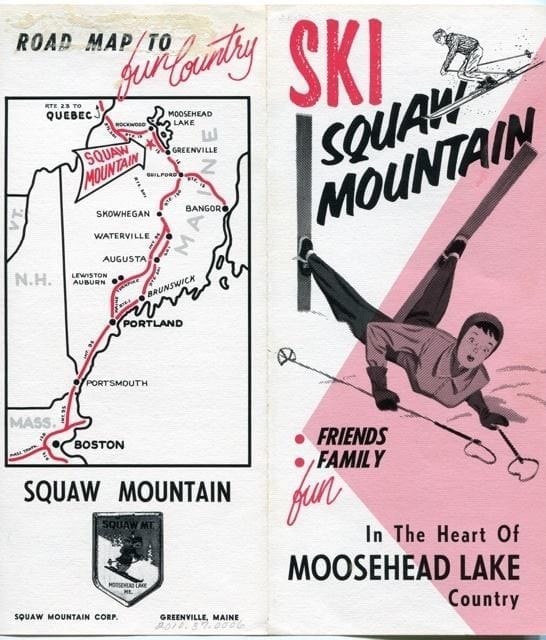 An old flyer from days gone by. I found this on the Facebook page Moosehead Memories. I’m willing to bet the Moosehead Historical Society holds this literature today.

Mount Katahdin in Baxter State Park. Mountain View Pond is the closer body of water and Moosehead Lake is the further.