Spending a cozy fall weekend in a cabin on Moosehead Lake

A guest blog by Mary Alexis of  Stella Eire – https://www.stellaeire.com/

Every year my boyfriend Ryan and I take a trip for our anniversary. Admittedly this year, considering everything that’s been going on in the world, I was gearing up to have a fall staycation at home. Then we found Tomhegan Wilderness Camps. As far as travel goes during a pandemic, I felt like a camp in the North Woods was a fairly safe and isolated option. If only I knew how isolated it truly was!

So off we went on our 7 and 1/2 hour trek up to the North Maine Woods from our home in the NorthWest corner of Connecticut. I realize a drive like that may sound daunting, but with our stops in Portsmouth, Kittery, and Augusta to buy provisions we hardly even noticed the time passing. Boy was it worth it. I’m not exaggerating when I say Moosehead Lake is one of the most beautiful places I have ever visited. The water is pristine and since we got there just as the leaves were done peaking, the light was golden and the colors made everything even more magical.[/vc_column_text][vc_column_text]Our first night was spent relaxing by the fire and acclimating to our new surroundings and can I just say, you’ve never felt true relaxation until you light a fire in a cabin in the middle of nowhere as the rain comes pouring down. It was absolute heaven. Tomhegan Camp is located about halfway up the western side of Moosehead Lake, a 45 minute drive from the town of Greenville on the southern tip. Once you reach the road the camp is located on however, it’s another 20 minute drive through woods and a game actuary until you finally reach your destination on a little mile long strip of the waters edge.

Our second day was just full of moments walking around and not believing what we were seeing. Our cabin had its own little slice of shoreline where in the warmer months you could launch your kayak or canoe, with a fire pit and benches nestled right on the rocky shoreline. This was a big selling point when trying to find a cabin to stay in, I loved that we had our own place to go and watch the ducks and feel the cold autumn breeze whip over the water. Although the view from the camps’ marina and dock was stunning as well.

Wildlife at the Cabin

One of the best parts of our stay at Tomhegan was definitely the twice daily visitors. In case you’re not familiar, Tomhegan is situated on the outskirts of Tomhegan Game Sanctuary and surrounded on one side by miles of woodland and the other by Moosehead Lake. This means that even though we saw lots of familiar animals, they were a lot friendlier than we were used to. I’m thinking the fact that travelers staying at the camps feed them every day might have something to do with it…

Unbeknownst to me our camp, Diana, was actually named after one of the deer that would come by to visit people staying at Tomhegan and Diana was actually the first ever cabin they had on the property. I’m not sure if the deer roaming around these days are Diana’s direct descendants but I like to think the knowledge of “if we go up to them, the humans will give us food” was passed down from her. 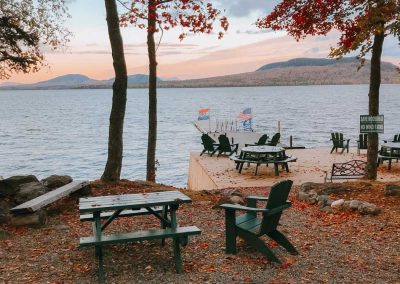 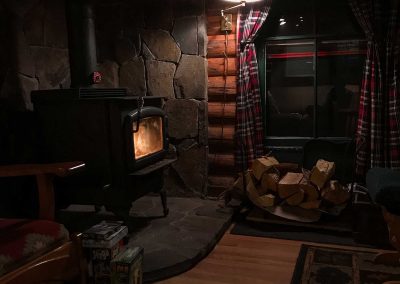 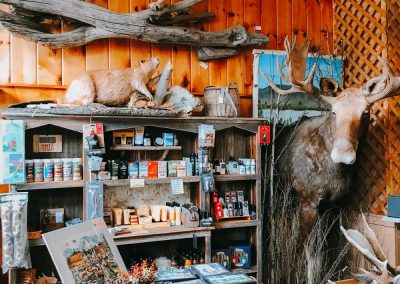 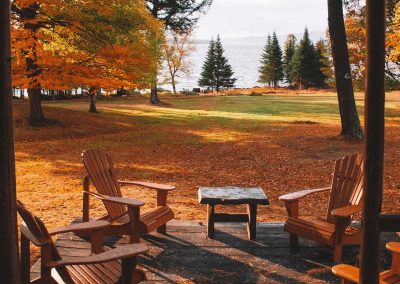 A visit to Greenville during the Fall

On the third day of our trip we finally made it down to Greenville, the closest town about 45 minutes away at the southern tip of Moosehead Lake. We honestly weren’t expecting much but were hopeful to find a couple souvenirs and maybe have a meal we didn’t have to cook ourselves. After a lovely lunch at The Stress Free Moose (love that name), we walked maybe a quarter mile to the center of town with all the shops. If you don’t know me very well you might be surprised to know that I really only have 2 main interests in my life and that’s books and rocks. Yes, I said rocks. Not only does Greenville have 2 book stores, but an entire shop dedicated to fossils, rocks, and crystals. I’m a bit ashamed to admit how much I spent…

Another favorite shop of ours in Greenville was Kamp Kamp – the Moosehead Lake Indian Store, sort of a cross between a curio shop, antique store, and tourist attraction. We loved everything we saw as we walked around and almost wished we had the car space to bring some of the antique furniture home with us (there was an entire dining set on sale for $95!)

Dinner at The Birches

Our day was rounded out by a lovely dinner right next door to Tomhegan at The Birches Resort. This camp was set up more like how’d you’d expect, with a main lodge containing a restaurant and bar surrounded by cabins on either side. The restaurant was super cozy with lots of fireplaces and their view of the lake was the perfect place to watch the sunset.

I can honestly say that I’ve been to many places in my short 26 years but Moosehead Lake was one of the most life changing and I left with the knowledge that I’d be returning for many years to come. For more about our trip to Moosehead and Tomhegan Camps head over to my website www.stellaeire.com and follow me on Instagram and Facebook @stellaeire. 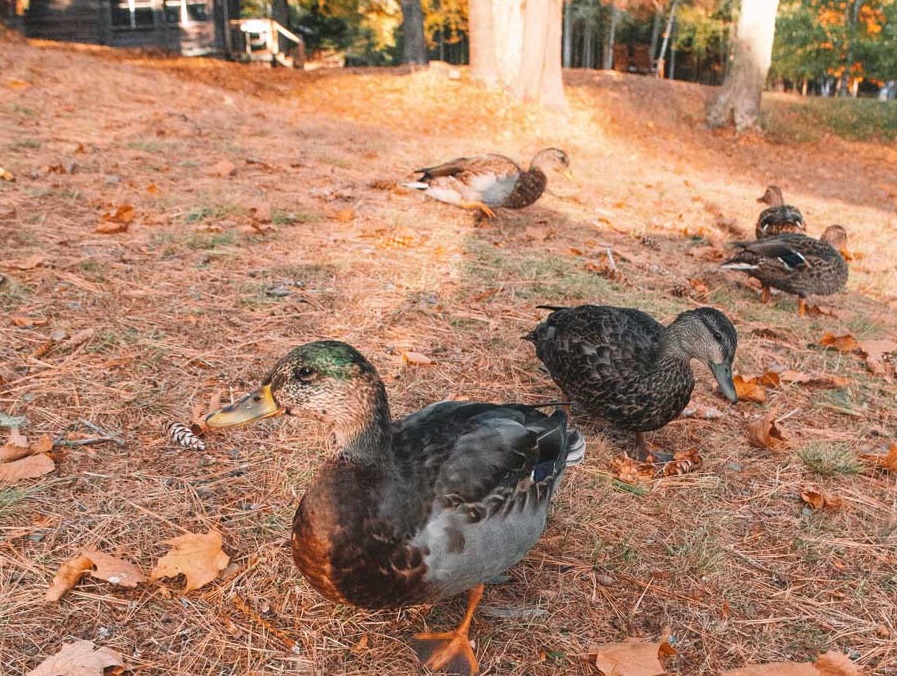 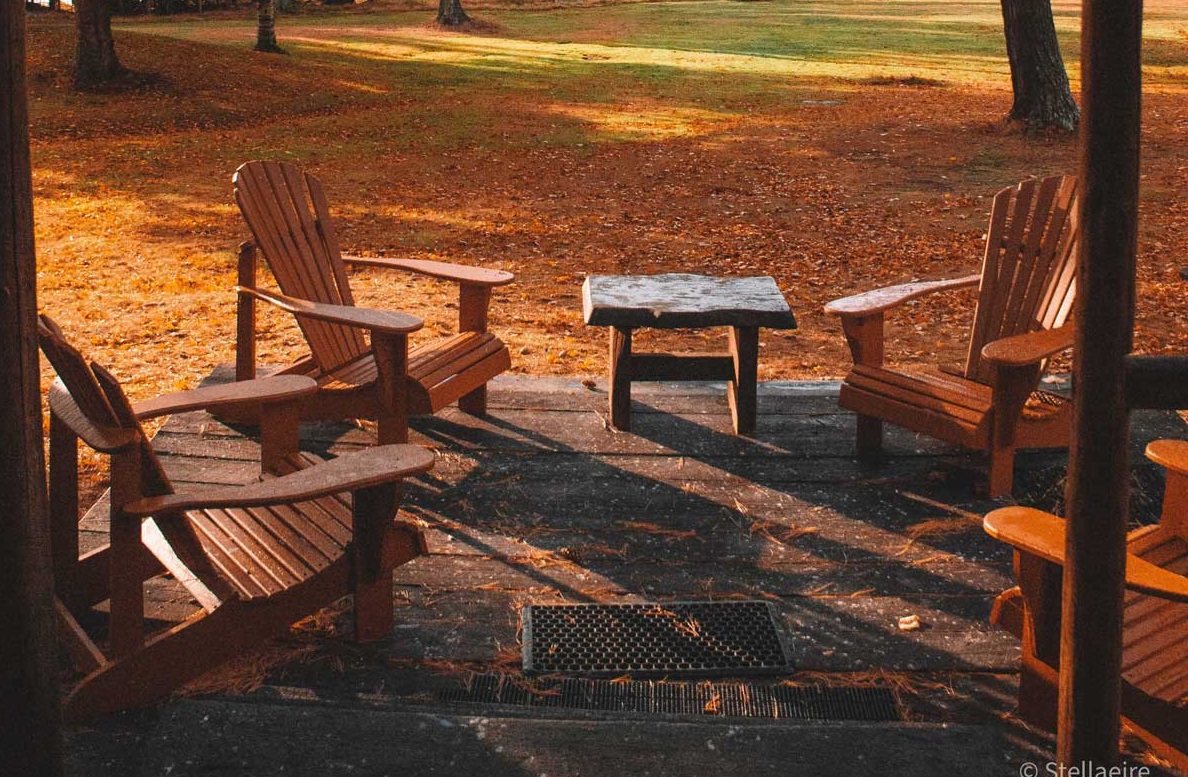 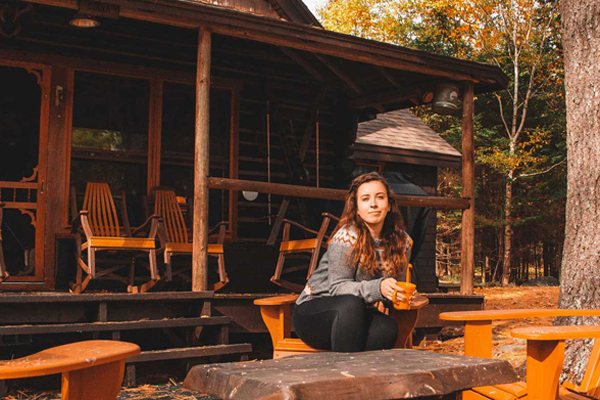